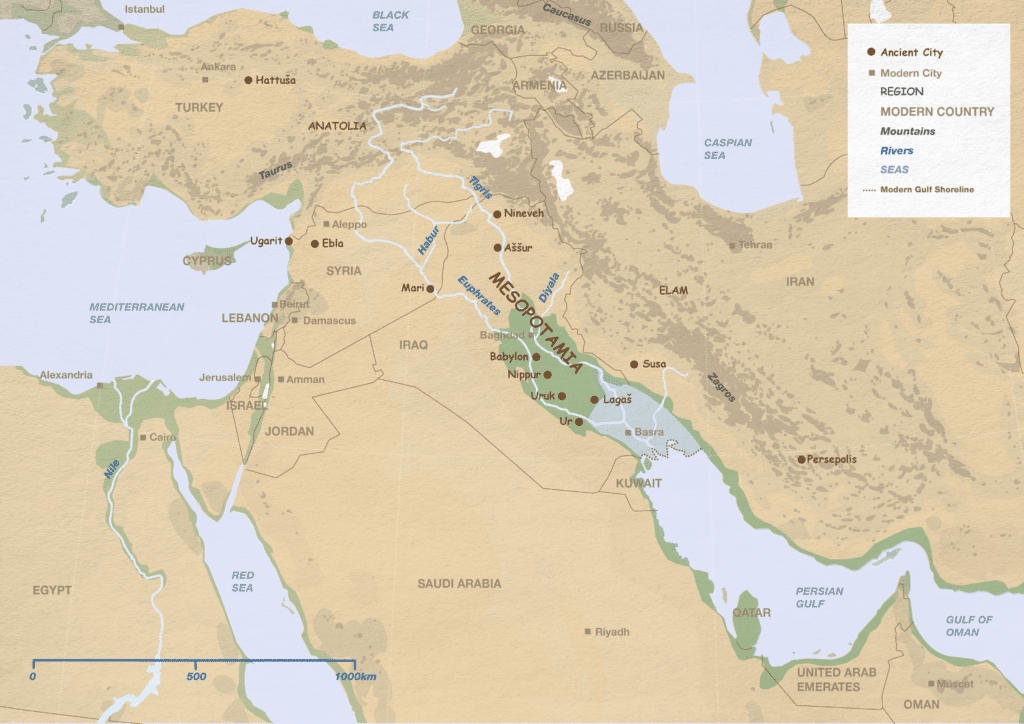 The Greeks described it as a paradise. Yet nothing is easy there, especially in the south: a desert, arid region, where rainfall is scarce; where clay is everywhere while stones are nowhere to be seen; where palm trees cover acres, while other trees are rare.

The history of Mesopotamia started millennia ago. When the first farmers settled down in small villages along the rivers.

So long, too
many facts to remember. I
don’t know much about the old
Sumerian kings, except
Gilgameš.

First, there was Sumer

Then a single man rose to power and established an Empire: Sargon

He is no Sumerian, he is Akkadian; he is an orphan found in a cradle on the river, raised by the goddess Ištar. Servant of the Sumerian king, he overthrows him, takes the power and conquers all Mesopotamia.
But Sargon’s empire does not long survive to its founder, and collapses under the thrust of eastern invaders.

Sumerians come back in the spotlight

Soon the capital of a new Empire is the city of Ur: new conquests, new unity of the Land of Sumer and Akkad, new form of government. But the new empire does not last long, and succumbs to an administrative nightmare and... invaders from the East. The History of Mesopotamia is a long, turbulent one, full of conflicts and wars, and the rise and fall of Empires.

The old cities regain their power and independence, under the rules of new kings, who are no longer Sumerians and speak a different language: Akkadian. They form a myriad of small kingdoms that all try to reunite the Land of Sumer and Akkad on their. Only one will succeed: Babylon.

The great king Hammu-rabi of Babylon establishes a vast empire, ruling over all Mesopotamia. He creates a law code.

The club of the Great Powers dominates Near East

Four powerful states rule over Near East: the kingdom of the Hittites in Anatolia, of Mitanni in northern Mesopotamia, of the Kassites in Babylonia and Egypt.

They continuously interact with one another as both equals and rivals. Hittites and Egyptians both want to gain influence over Syria and the Levant: they fight and sign treaties to define their domination over the region.

The Assyrian kingdom, who had overthrown the kingdom of Mitanni, takes advantage of the new situation. Assyrians are fierce and merciless warriors who spread fear over all Near East. They conquer many countries and establish the largest territorial empire ever seen before.

But many conflicts for the succession to the throne weaken the Assyrian empire and the last capital, Nineveh, cannot resist to the Babylonian attack.

Babylon regains its past glory

For a brief timespan, Babylon regains all its past glory, and dominates in its turn all Near East under the rule of powerful kings, such as Nebuchadnezzar.

Persians put an end to the glory of Babylon, then Alexander the Great conquers Mesopotamia.

No Mesopotamian cities will ever regain political power. But Babylonian culture survives. The scribes go on copying ancient texts during the reign of Alexander’s successors and transmit Babylonian knowledge to the generations to come.

Fascinating civilisations came to life in Mesopotamia, along the Tigris and the Euphrates. Sumerians, Akkadians, Babylonians, Assyrians, all of them astound us by their ingenuity and creativity.