There are hundreds gods, goddesses and other demons or geniuses in the ancient Mesopotamian world.

Gods and goddesses are “living” in a city: their fate is linked to the political history of their city. They are strong when the city is powerful, weak when the city declines...

Many myths and legends tell us about the powers and achievements of the gods. Their adventures are amazing and the relationships between them often quite complex.

Meet some of them!

His fate is closely linked to the city of Babylon. His importance increases together with the political rise of Babylon, under the reign of Hammu-rabi and his successors (II millennium).

But when the city is later conquered by the Assyrian king Sennacherib in 7th century B.C., Marduk (i.e. his statue) is taken to Assyria like a prisoner. He is, however, brought back to Babylon by Sennacherib’s successor, who also rebuilds Marduk’s temple.
The god will regain his powers to the full in the Neo-Babylonian period when Babylon is again the capital of an empire.

I know enūma eliš by heart!
I will tell it to you one day! 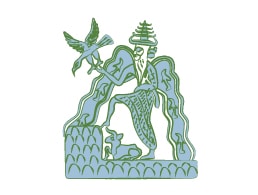 He is the father of Marduk. His city is Eridu. He is the god of the subteranean freshwater ocean (abzu, apsû). He is mostly associated with wisdom, magic and incantations; he plays a major role in the birth of civilisation and is often seen as favourable to mankind.

He is one of the most important gods in the Mesopotamian pantheon. He is usually called king, supreme lord, or creator and described as a "raging storm" or a " "wild bull". Despite these prestigious epithets, a Babylonian myth describes him terrified by the rebellion of the minor gods and shivering with fear in front of them! He has plenty of prestigious children, amongst them Ištar, Sîn and Ninurta. His city is Nippur. 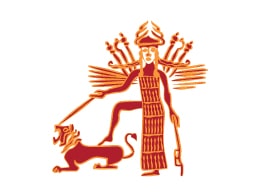 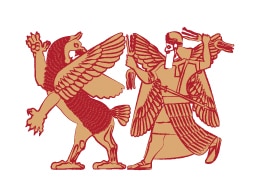 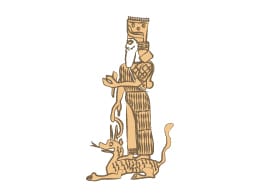 The Mesopotamian scribe god is also the god of wisdom because knowledge was transmitted through writing. From the end of the second millennium on, he was regarded as the son of Marduk, and often "visited" his father in Babylon. The god is sometimes shown riding on the back of a snake-dragon, but we know no myths about him. 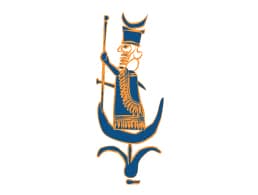 The moon-god, is the son of Enlil and the father of Šamaš (the sun god). His most important shrine in southern Mesopotamia was in Ur. Though very popular, he always remained subordinate to the chief gods of the pantheon. For this reason, he travels a lot to visit them and pay his respect.